I define “Natural Parenting” as that which humans did for at least 2 million years and which, until recently, most modern foragers also did.  If this type of parenting worked successfully for millions of years, maybe we ‘moderns’ should think about modifying modern life to better incorporate natural parenting. 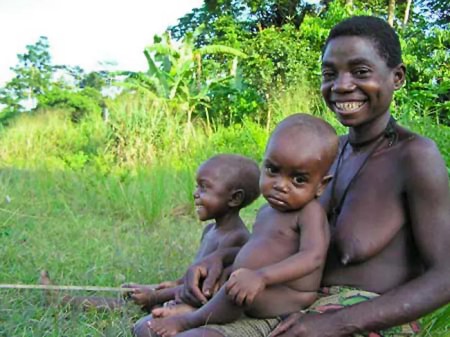 Aka parents are considered among the best in the world.

Some parents are doing a modified version of natural parenting called ‘attachment parenting.’  Mayim Bialik has written a book (Beyond the Sling)which discusses attachment parenting in great detail using her experience and that  of her husband in raising their two sons, along with some anecdotes of their friends.  And, yes, this is written by ‘Amy’ from the Big Bang Theory. She is an actual neuroscientist with a PhD: she studied the hormones of attachment .  Both her education and experience provide credibility for advancing the idea that attachment parenting is the way children should be parented.

As can be seen in a comparison of what I wrote in Natural Parenting and what Bialik writes in Beyond the Sling,  we have many points of agreement, particularly that breast is best and co-sleeping is a great idea that encourages breast-feeding on demand.

If you are thinking about getting pregnant or already young children, I recommend this book on attachment parenting as the natural way to parent with 3 BIG caveats.

1. A vegan diet is not natural for humans. We need a diet with about 20% animal protein. The reason her kids nurse for 4 – 5 years is that they NEED the animal protein of her milk in order to be healthy. Clearly, she enjoys this type of attachment so much that she has not considered the biological reason her children are nursing well beyond the usual age of weaning.

2. Homeopathy ‘treatments’ are psychological (placebo), not physical.  If they do no harm and make you feel better psychologically, I suppose they are not a problem.  However, if you think they will actually cure an illness, think again.

3. I cannot believe that a neuroscientist would so foolish as not to vaccinate her children! The non-vaccinating crowd is too young (under 55) to have lived through the horrors of epidemic diseases and do not realize that their ‘choice’ could have devastating consequences not only for their own kids, but for babies, the elderly, and immuno-compromised individuals who cannot be vaccinated and who will become ill when exposed to her unvaccinated kids.

Those caveats aside, much of Bialik’s advice on parenting is very good.  Unfortunately, modern work situations do not provide the flexibility that Bialik, as an actress, has to fully implement attachment parenting.  She realizes this as she gave up the opportunity for an academic career because it would make attachment parenting almost impossible.

Women who want or need to work, but lack the flexibility that Bialik has, encounter tremendous difficulties in being the parents they would like to be.  Attachment parenting is not even an option.  Liz O’Donnell makes this clear in her book Mogul, Mom, & Maid: The Balancing Act of the Modern Woman. Twenty-five years after The Second Shift was published, women who work outside the home or as entrepreneurs are still doing the vast, vast majority of housework and childcare. This has to change. O’Donnell uses the stories of a wide variety of women to detail the problems and outline the solutions. One of the things that needs to change is the idea that childcare is a woman’s issue. It is a parental issue. Businesses and the school system must be modified so that both men and women can be fully-involved parents.

Attachment and natural parenting would have more of a chance to occur if parents in the United States were given paid maternal and paternal leave, as is the case in all other advanced countries in the world.  In fact, there are only 3 other countries in the entire world besides the US that do not provide paid maternal leave.  The United States also needs to provide better childcare options for parents. Having businesses and schools provide on-site childcare would be a tremendous help.  Expanding the childcare tax credit and updating the 1976 reimbursement levels to 2014 levels would also make life easier for parents.  It may also make sense to move from a state that does not support working mothers.

Natural parenting has been effective for millions of years.  If we want physically and psychologically healthy children, we need to modify modern society to enable natural parenting.

The Positive Deviance Initiative defines Positive Deviance as an approach that realizes “…that in every community there are certain individuals or groups whose uncommon behaviors and strategies enable them to find better solutions to problems than their peers, while having access to the same resources and facing similar or worse challenges.”

This methodology has been used by the Initiative in a wide variety of contexts.  One of the first initiatives involved improving child nutrition in Viet Nam.   Researchers to villages with high levels of child malnutrition found that not all children were malnourished.  They studied the mothers with healthy children to see what these “positive deviants” were doing differently and then asked those women to teach the other women.  Malnutrition was reduced.

Another action involved altering cultural perceptions towards female genital mutilation in Egypt and other countries.   When women and men  listened to stories of local women who had not been ‘cut’, were not promiscuous, and were able to marry, attitudes began to change.  Change was further propelled by women who told their stories of how ‘cutting’ had ruined their lives.

A major problem in culture of honor societies, such as those in Afghanistan and Pakistan, is the negative attitude of men towards women.  Misogyny is rampant and fierce.  How can positive deviance tackle this problem?  Fortunately, we have an important example of positive deviance in Ziauddin Yousafzai.

Although raised in a very traditional family in a small community in Pakistan, Yousafzai valued education so much he decided to become an educator and open schools for both boys and girls.  His first child was a daughter.  Instead of ignoring her, he made sure she knew she was valued and that she received a quality education.  Thanks to this positive deviant father, Malala has become a voice heard world-wide making the case for educating all girls everywhere.

Positive deviance is dangerous in regions controlled by the Taliban and like-minded men.  What can we do to find and support positive deviants?